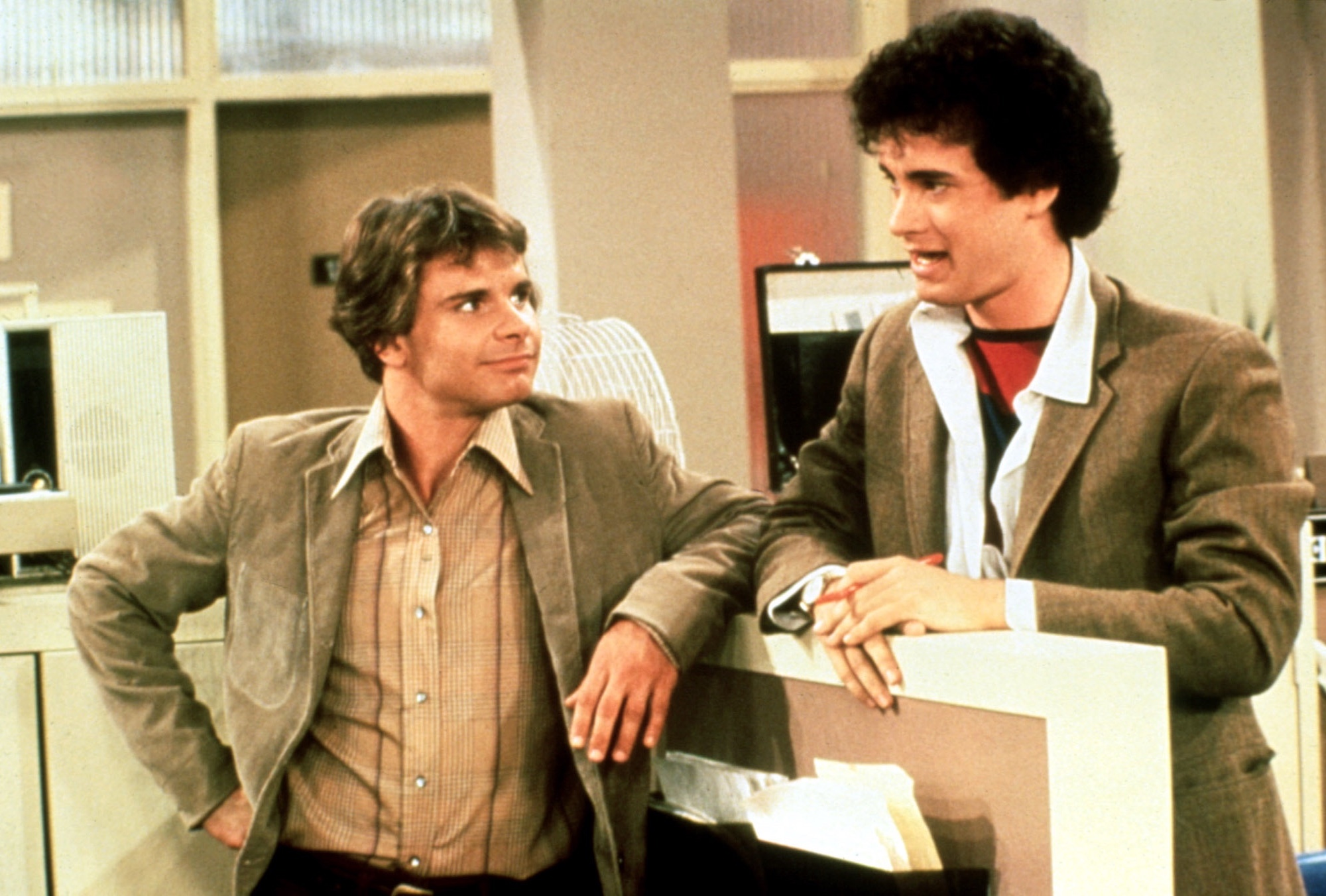 I don’t remember when I first learned about Bosom Buddies. I’d watched clips. I knew the plot. However, I never took the time to really dive into it. I suppose I thought I knew what I needed to know. Did I really though? With the passing of Hanks’ co-star Peter Scolari in October of 2021, I realized I needed to give the little sitcom a shot.

Society remembers Bosom Buddies as the series Tom Hanks top lined in before his movie career exploded. This is what I was envisioning. However, as I finally dove into the first season of the show, I couldn’t help but notice, it is so much more than that. Well, I’ve written my thoughts down in hopes of convincing you to not make the same mistake I did.

Bosom Buddies follows two friends and advertising executives, Kip (a pre-almost everything Tom Hanks) and Henry (Peter Scolari). When their apartment in condemned, the only room they’re able to find is in a women-only hotel. So you know what that means! They have to dress as women. Holland Taylor, Donna Dixon, Thelma Hopkins, and Wendie Jo Sperber costar in the series.

There’s one thing which must be discussed first and foremost… and it is something which can’t be ignored… The Tom Hanks of it all. Hanks is of course one of Hollywood’s brightest A-listers and will most likely be remembered as one of the greats to get in front of the camera. At this point though, he was a new face on the screen.

Looking at Hanks’ filmography, Bosom Buddies really stands as his breakout. Prior to landing the part of Kip, he had two credited roles. One came as a guest in a 1980 episode of The Love Boat, the second in the horror movie He Knows Your Alone (he receives roughly 9th billing). He was far from the superstar we recognize him as today.

So, watching Bosom Buddies in 2022 is a completely different experience than when it initially ran in 1980. At the time it aired, the show was just another first season ABC sitcom in their Thursday night line-up. They were sandwiched in a nice spot between Mork & Mindy (another study of star persona) and the long-running police sitcom Barney Miller. A new series could only dream of having a time slot like this.

In 2022 it’s difficult to separate the young actor on screen from the performer Tom Hanks would grow to become. The face and the mannerisms are of course familiar to the man who would become America’s Favorite Uncle. His persona is exactly the same, his stardom is just starting to simmer. He dominates the frame and usually steals every scene he’s in. He’s Tom Hanks after all.

Coming at the show through a contemporary perspective, Hanks’ persona is almost overpowering even against a strong supporting cast. There’s too much talent here to just sweep aside like this. Bosom Buddies shouldn’t just be Tom Hanks and his co-stars.

In fact, you could have knocked me over with a feather when I learned Holland Taylor was a regular in the show. The actress has been and continues to be one of my favorite performers for decades and she springs into this show fully formed with her own delightful persona. She’s a delight and a treasure in every role she tackles and things are no different here.

At the same time, 2022 has been my year to discover just how much I love Wendie Jo Sperber. Her name was new to me until viewing I Wanna Hold Your Hand earlier this year. Prior to that, this talented comedian had simply been Marty McFly’s sister in my head. I mean, she’s great in Back to the Future, but she spreads her wings in Bosom Buddies and gives some tantalizing hints at everything she could do… which Hollywood really didn’t give her an opportunity to show.

As Amy in Bosom Buddies, Sperber is adorable and honestly (for someone like me) flipping relatable. I felt that in I Wanna Hold Your Hand and I feel it here. Amy is smart, she’s underemployed and she’s a real woman (especially filmed next to the stunning Donna Dixon). At the same time, she’s head over heels in love with a rather dense boy. I get Amy. I understand Amy. Amy is all of us.

As season one comes together, the show understands they have something special in the Henry (Scolari) Amy relationship. The “A pairing” is certainly the more conventional Kip and Sonny (Donna Dixon) “will they or won’t they” which certainly dominates more of the narrative.

Scolari and Sperber though bring an intimate and familiar chemistry as early as episode four, entitled “Macho Man”. While the romance between the two isn’t always as obvious as the Kip/Sonny pairing, there’s more heart in the bond between Henry and Amy. The moments between the two are smaller, but they mean more. You find yourself willing these two to make it work.

I mentioned previously, I came to the show to be honest in the wake of Peter Scolari’s passing. He’s always been a figure who I was aware of, but he never quite entered my consciousness in the way he should have. His death struck me. Perhaps it was nostalgia, perhaps it’s something else, but in the months which followed, I’ve jumped into a lot of the work I haven’t seen (along with some deserved rewatches). As a performer he brought such a quiet confidence and emotionality to his work which continually astounds me and there’s more to say which really hasn’t been.

Henry emerges very much as the heart of the show as Bosom Buddies progresses through its first season. Scolari’s presence is quieter and more grounded than the loud and brash Kip and he shoulders a lot of the show’s more emotional work. At the same time though, there are real hints to his tremendous physicality and sense of physical comedy. Episode 15 of the first season, entitled rewrite best demonstrates just how much the juggler turned actor was capable of. Hollywood didn’t use Peter Scolari the right way. That’s my story and I’m sticking to it.

Ultimately though, Bosom Buddies is a 1980s sitcom and everything that implies. I’d be lying if I said there weren’t some leaps of faith. One must suspend disbelief. For instance, I found myself wondering how the girls in the apartment building don’t realize it’s strange that Hildegarde and Buffy are never in the same place as their “brothers” Kip and Henry. It’s a bit distracting.

Watching the narrative straight through, there’s a definite shift in the storylines midway through the season as the writers developed their confidence. This is best seen in the innovative and interesting “Rewrite” (s1e15). The episode is perhaps a bit avant garde jumping into the world of Henry’s books and following the characters through a few different rewrites. It’s a playful episode which gives the performers room to play, have fun and really leave reality behind. It’s definitely not the norm for the series, but it’s confident, fun and definitely worth a watch.

At the same time, the writers really find their footing as it relates to the character development into the second half of the first season. Episode 18 entitled “Best Friends” is a well-crafted half-hour showing Henry and Kip’s friendship truly tested for the first time. The episode mines Henry’s insecurity as well as Kip’s desire to be liked.

Meanwhile, episode 12 “How Great Thou Art” shoves Kip to the forefront as the struggling artist receives an opportunity to showcase his work in a show. However, when faced with actual criticism the usually brash advertising executive isn’t so sure of himself. It’s a great episode to see Hanks finding his footing as a performer.

Ultimately, the biggest struggle the show experiences with the characters surrounds the women living in the building. This isn’t a problem with the performers. The actresses are vibrant. I’ve already expressed my love for Wendie Jo Sperber and Thelma Hopkins established herself as a standout for me throughout the first season. At the same time, Donna Dixon fascinates me much in the same way Phoebe Cates does in Gremlins. These women needed so much more to do! Dixon establishes herself as a heck of a comedian, but she’s just as often stuck being the hot girl. Think of the performances we missed out from savvy comedic actresses because the 80s didn’t realize women could be more than hot.

All in all, Bosom Buddies emerged as a fascinating new-to-me watch even though its something I’ve been aware of for decades. The series has of course been remembered first and foremost thanks to its importance in the career of Tom Hanks. However, this over-simplification does the sitcom a disservice. There’s a talented and versatile cast acting right alongside Hanks who whose work has really been diminished in the face of Tom Hank’s oppressively likable star persona. There’s more to this show and if you haven’t checked it out, maybe it’s time to give it a watch.