In our last few Examining Harlow’s, we’ve been sitting pretty solidly in the middle of Jean Harlow’s career. During this time, the young actress finds herself stuck in a bit of a transition. Changes in censorship as well as the film industry saw the twenty-something bombshell unable to capitalise on her unbridled sexuality as much as she had in earlier works, forcing her into a strained career evolution. While it was shot a little over a year before the more awkward transitional roles of Suzy and Libeled Lady, China Seas shows the actress handling the changes with grace. How does the Clark Gable starring action romance fit into the scope of Jean Harlow’s career?

China Seas follows the earthy, “professional performer” China Doll (Jean Harlow). She pursues the love of her life Alan Gaskell (Clark Gable) onto the ship where he serves as Captain. However, she receives a shock when she learns that Gaskell has decided to marry another woman, the classy and wealthy Sybil Barclay (Rosalind Russell). There’s drama on the high seas as Dolly becomes involved with the shifty “Jamesy” MacArdle (Wallace Berry). There’s action and drama on the high seas which only escalates when the ship is invaded by pirates. Tay Garnett directed the film from a script by Jules Furthman and James Kevin McGuinness.

In this column, we’ve been watching a steady stream of Harlow’s middle and later work. With its release coming in August of 1935, China Seas lands in the second half of Harlow’s career. This film feels more reminiscent of her earlier work, conjuring definite memories of Red Dust, one of Harlow’s earliest hits. While her character had taken a large step away from the unbridled sexuality of her previous roles, China Seas does not feel as isolated from her screen persona as many of her later parts.

In fact, Harlow still brings the bawdy nature of her Pre-Code films, it is just wrapped in a decidedly Production Code friendly wrapping. The costumes are a bit more modest, but Harlow’s chemistry with Gable feels as volatile and sexually charged as it did in Red Dust. This is heavily contrasted against the perceived “good girl” Sybil. As in 1932’s Red Dust (with Mary Astor in the “good girl” role), Harlow’s character must wether the barrage of guilt and attacks meant to demean her in the face of her romantic rival. At one point, Gable’s Gaskell looks over at her during a crowded dinner on-board ship. As everyone (including Sybil) looks on, he introduces her as a “…Professional… entertainer”. However, in the way he says it, you know he doesn’t mean a show girl. Later in the film, Gaskell snaps at her, “I’m quite aware…. You’re always waiting for a sailor to comfort him, as only a woman like you can comfort a man whose too tired or too drunk to care…”.  There’s very little subtlety to what he’s referring. 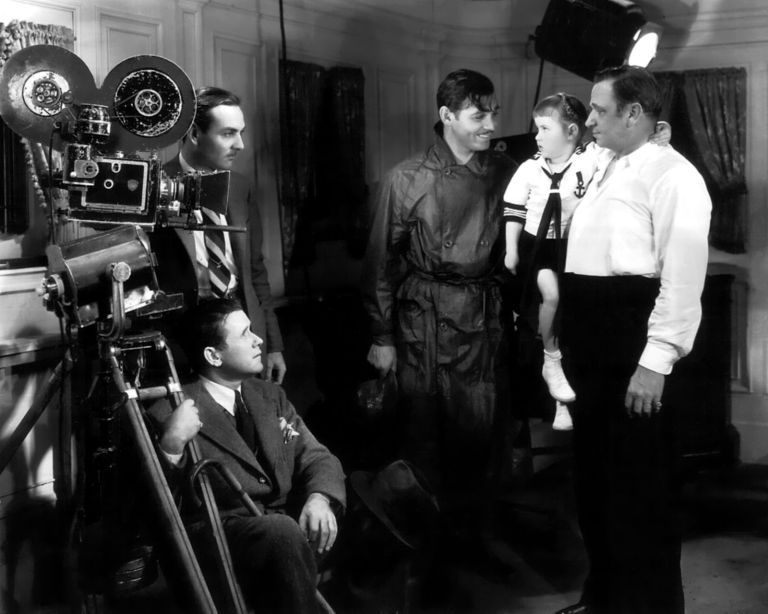 Interestingly, once again Gable’s screen persona actually seems to be working in tandem with Harlow’s. They function in the movie on very equal footing. She may be a “bad” girl, but he’s no better than she is.  These two are meant to be together, and it shows. As such, the rough and abrasive nature of Gaskell’s behaviour towards Dolly never hits quite that hard. This is largely because they are so similar in the scale of the narrative and the power dynamic is much more even matched. This is definitely not the case with some of Harlow’s other romantic pairings (see: Red-Headed Woman).

Interestingly, in this film there’s very little question to how the ideal romantic pairing is supposed to go. While Sybil exists as the good, rich woman he’s supposed to marry, she’s far from necessary to the narrative. In fact, she’s actually absent from a large chunk of the second act. In fact, she only returns in time for Gaskell to let her down (easily, of course) and admit he truly loves Dolly.

A pre almost everything Rosalind Russell appears as Sybil. For the second film in a row (she was also in Reckless), Russell appears as the good girl standing in the way of the main romantic pairing. Ultimately, the role is a thankless one for the young performer. The actress shows absolutely no sign of the delightful snarky wit she’d come to showcase later in films like The Women and His Girl Friday. It is fascinating to watch the dynamic actress as a young woman, very much paying her dues as she works her way up the film industry.

Tonally, the film struggles a bit into the second and third act. The focus on the narrative is very much the romantic pairing, so when the plot shifts to one of intrigue and piracy, it seems a little forced. As such Wallace Berry (whose character exists largely to usher in this plot) feels a little wasted.

Finally, the effects work in the movie is stellar. China Seas features a harrowing actions sequence as the ship sails into a squall. This is 1935 and computer generated effects were not a thing… as such, everything in this film had to be duplicated in reality. Harlow’s and Gable’s characters are taken out by a substantial wave at one point. Later, a number of actors are in unnervingly close proximity to a piano which isn’t nailed down as the ship is violently tossed by waves. These stunts feel incredibly well-structured and polished for a movie from this era.

China Seas is a solid movie from the middle of Jean Harlow’s filmography. The romantic action drama features yet another solid pairing between Clark Gable and the actress, showing just why they were ultimately so good together. While China Seas is far from progressive in terms of gender and sexuality, the melding of Gable and Harlow’s star personas doesn’t feel as awkward as certain other pairings in Jean Harlow’s career.