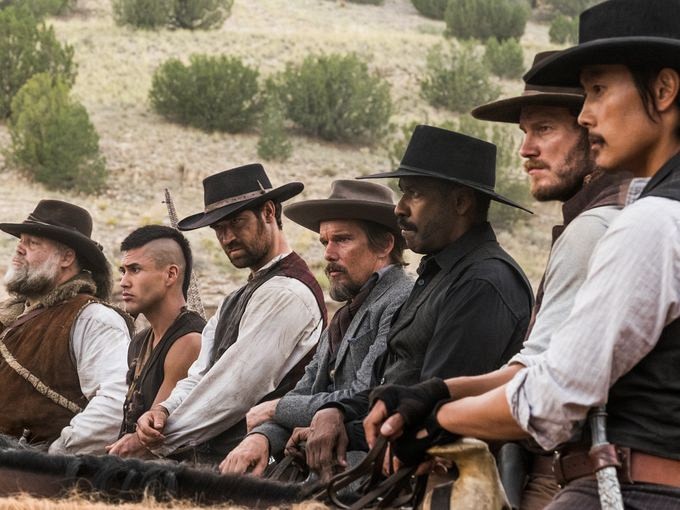 The 2016 remake directed by action movie auteur extraordinaire Antoine Fuqua brings the same general story that viewers of the earlier versions will be familiar with. A small town recruits a number of gunfighters to help defend them from the evil villain holding the town hostage. The film stars Denzel Washington in the lead, closely backed up by Chris Pratt, Ethan Hawke and the always amazing Vincent D’Onofrio. The equally amazing Peter Sarsgaard twirls his moustache as the villain.

The film coming from Fuqua (king of the critically acclaimed action film:  Training Day, Southpaw, Brooklyn’s Finest), sees its strength definitely stemming from it’s action sequences. The final battle sequence is stunningly crafted and hard-hitting despite the film’s PG-13 rating. You can almost feel the shock waves of the explosions, and the tension only skyrocket when a gatling gun comes out to play. It seems a shame though that the film was only rated PG-13 (studio decision, perhaps?). The additional freedom  of an R rating might have allowed the talented director some additional freedom, especially working in the rough and violent period that was the old west.

The film brings together a talented cast. Denzel Washington is always good, no matter what the role and Chris Pratt brings his A-game at what he does best (being Chris Pratt…). The strength in the cast really comes from the back line of characters. Vincent D’Onofrio continues to prove himself as one of the greatest character actors working in Hollywood right now. It’s almost impossible to distinguish him role to role. Byung-hun Lee and Martin Sensmeier proved stand outs as well. Sensmeier is a relative newcomer, and up until recently (GI Joe: Retaliation, Red 2 and Terminator Genisys) Byung-hun Lee has been honing his skills in Korean cinema.

The film misses though in its development of the villain. Peter Sarsgaard is tragically under-utilized in his performance as Bartholomew Bogue. Sarsgaard is an incredibly talented actor, not afraid to sink his teeth into a variety of roles from Flightplan, to Jarhead and even The Green Lantern (*shudder*). Throughout the more than 2 hour movie, Sarsgaard is in a grand total of four scenes. There is the tantalizing hint of a fascinating character in Bogue, Sarsgaard is never truly allowed to hit the ground running.

The film also misses in an opportunity to play with the western genre. The cast is a diverse blend of talented actors, and while race can and has been a major factor within the western genre (the cast of the 1960 film is primarily white, with the only minorities being the Mexican villagers). With the diversity of the cast in the 2016 film, the topic of race is largely absent. The men mostly treat each other as equals and even sit down to dinner together. It seems free from the racial tension that has been present in decades past, and there seems to be a desire for this to be more of a revisionist western.

However, it’s disappointing that a film that can take such a diverse racial perspective is still so acutely aware of gender. The film’s female characters (lead by Haley Bennett as Emma Cullen) are largely set dressing. Once again (as with Bogue), there seems to be a desire to develop Cullen as a character, but the ideas never quite come to fruition. We watch as Faraday (Chris Pratt) catches her practice her shooting by herself, and while she’s a far more skilled shot than any of the farmers the gunfighters have just been working with, he feels it necessary to try to teach her how to fire a gun. When she later expresses an interest in joining the fight, she is told to go with the women and children. Seeing the gunfighters are a man down (gee, thanks, Ethan Hawke), and she once again volunteers to help, Cullen is told she’ll have to put on pants if she wants to fight. Finally, the character has a number of chances to shine. When she finally has her moment, (…tiptoeing around spoilers here…) her gun is quite literally taken away by Chisolm (Denzel Washington) and handed (in a moment of masculine bonding) to Teddy Q (Luke Grimes) who, wounded early in the fight, has not done a whole heck of a lot.

All in all, The Magnificent Seven is stellar and entertaining as a box-office geared popcorn film. It sets out to entertain you, and it does just that. However, there is very little below the surface of the narrative, and can easily schew problematic. Have your expectations in check when you go to the theater, and you’ll enjoy the film immensely.

One thought on “The Magnificent Seven: More Like The Average Seven”