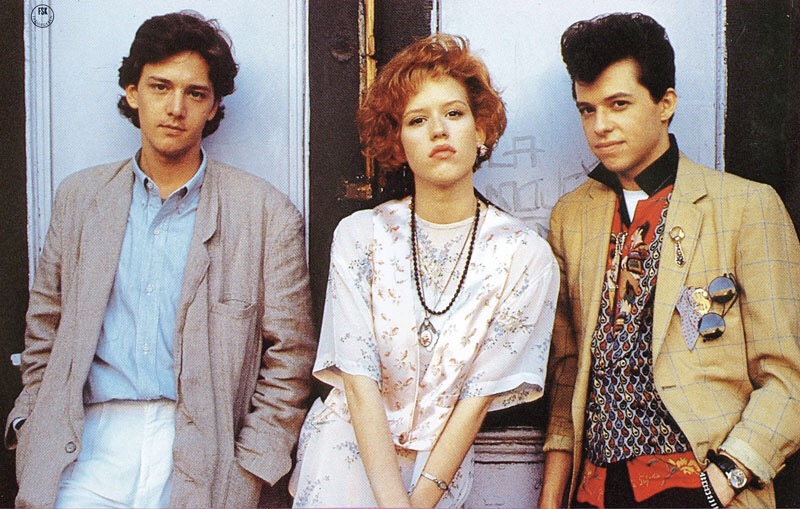 Molly Ringwald truly struck a chord with audiences in the 1980s. This is the decade when the “Brat Pack” took Hollywood by storm in films like: The Breakfast Club, St. Elmo’s Fire, as well as separately in movie like Sixteen Candles, Pretty in Pink and Weird Science.  Of the nurmerous Molly Ringwald solo pics, Pretty in Pink has long been one of my personal favorites. Perhaps it’s due to the adorableness of Andrew McCarthy (Yes, ladies. I lean towards Blaine). 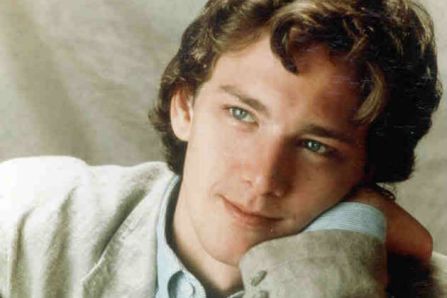 The stories of the film’s iconic ending are interesting. (Are there be worries about spoiling a 30-year-old film?) Should Andie (Molly Ringwald) choose the quirky and adorable Duckie (Jon Cryer) or the preppy, cute Blaine (Andrew McCarthy)? The film is known to have been plagued by re-shoots as film makers struggled to decide who Andie should end up with as the final credits roll. This actually explains Blaine’s strange look at the end of the film. When the final ending was finally shot, Andrew McCarthy had shaved his head, and lost weight for another film role, forcing film-makers to create a wig for the actor in the now classic final scene.

Molly Ringwald’s career is uniquely tied to Hollywood in the 1980s. In each of her films, her star persona is that of the “average” girl, or even (as in Pretty in Pink) the girl from the “wrong side of the tracks”. In a decade that is noted for its highly stylized glamour and excess (Wall Street, anyone?), it seems somehow refreshing (at least in this time) that Ringwald was able to craft herself such a unique persona and still manage to be the romantic lead (and not a quirky best friend).

The female characters (and their respective personalities) throughout the 70’s and 80’s tend to be problematic. These characters can often be divided into two groups: “the virgins” and “the sluts” (for lack of a better term). In Pretty in Pink, Andie very much falls into the virginal classification (think Jamie Lee Curtis in Halloween). It’s more desirable to be a member of this group in 1970’s and 1980s cinema (and healthier… you quite literally live longer…). Despite this fact, there are other aspects of Andie, when analyzing her character, that make her an unconventional female lead. As such, I find it moderately progressive that not only does the virginal Andie have one man pining after her, she has two (and at one point, three… if we count the less than savory James Spader).

With an argument coming from a feminist perspective running through my mind, female characters still have a long, long way to come. I find the development of Andie within the narrative, as an artistic (almost punk) character (in a decade which was all about glamour) feels like it’s trending towards progressive. Even looking at this through a contemporary lense, where Hollywood still puts the “hot girl” in glasses, and calls her a nerd, there are a number of films where a character like Andie would be relegated to being the quirky best friend of the main character. It’s refreshing that those of us who make the occasional off clothing choice (Yay! 80’s fashion!), or those who perhaps dare to be different, can indeed lock down someone like Blaine.

The 1980s was a notable decade when looking at the scope and development of the teen movie. Hollywood really found themselves paying attention to the teenagers as a demographic in a way they hadn’t since the 1960s. Throughout the decade, Molly Ringwald carved herself out a niche as the quirky girl next-door, who wasn’t the friend of the female lead. She got her own story and her own love interest. And this is why I like Pretty in Pink.