I spent far too many years of university studying teen movies, and teen culture. Perhaps, this explains the pop culture heavy focus in my writing during the lean post-graduation years. For this idea for a new segment, I wanted to focus on teen movies through the decades. First up, I’d like to focus on a movie which probably makes the list of one of my all-time favorites, Come September (1961).

Come September emerges out of the studio system in the early 1960s. It was one of a rash of Hollywood films which heavily featured a number of clean-cut American youths romping around the European landscape. Come September, Rome Adventure, Gidget Goes to Rome, A Light in the Piazza are just a few that come to mind. The film stars Rock Hudson as Robert Talbot, an American industrialist who comes to Europe once a year to visit his… girlfriend? mistress? lover?… Lisa (Gina Lollobridgida).  While he normally comes in September, Talbot has (for once in his life) chosen to mix things up. He is unaware that while he’s not in Italy, his servants run his plush Italian villa as a hotel for European tourists (read: teenagers). Unable to send the groups of teenagers away, Talbot’s man-servants Maurice (Walter Slezak), must maintain a number of charades to not only protect his boss (and his dalliances with the stunning Lisa), but also the groups of teenagers who are quickly pairing off. The main romantic pairing is Bobby Darin and Sandra Dee, who would marry at the 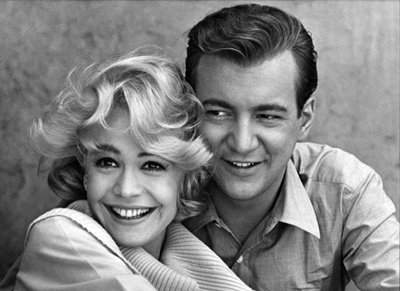 conclusion of filming 1960 to a mini-scandal. She was (reportedly) between 14-16 years old. Her age real age was lied about throughout popular culture to such an extent that it’s almost impossible to tell just how old she was. Darin was 24 years old at the time. The two had stayed married for a long time by Hollywood standards, when they divorced in 1967.

Come September is a crazily fun movie. The romantic narrative is surprisingly gutsy for 1961, when considering it’s treatment of sex and attraction within the romantic coupling. Take a look at the below edited clip, which features Bobby Darin singing a song in the film, “Multiplication”. Thank you to Music Man 52 for posting.

Listen to those lyrics. Reeeaaaallly listen to them. He’s not taking about mathematics in the song. While the song is not overt, the sexual innuendo within the song is thinly veiled at best. The fangirl in me love to watch the sequence, especially the eyes that Bobby Darin and Sandra Dee are making at each other throughout. Would I have shipped them? Yes I would.

The discussion of sex doesn’t stop with the teenagers. The film plays a lot with the relationship between the older Talbot and Lisa. The film is more than aware of Lollobrigida’s smouldering and exotic sexuality, very akin to her contemporaries Sophia Loren and Brigitte Bardot. This would have been a completely different film had it starred Rock Hudson and Debbie Reynolds (or Doris Day!). There are a number of sequences throughout the movie which allude to the adult nature of their relationship. There’s use of a private balcony. There’s late night rendezvous. It makes it all the more comedic when Robert attempts to stifle the teenagers attempts to couple, propelling the narrative into a lighthearted generational battle between the two groups.

Visually, Come September is a stunning film. There is something about the age of Technicolor that just begs to film over in Europe. The exotic Italian cities, and romantic villa scenes are almost dreamy and idealized on-screen. This is how Europe in the 1960’s is supposed to look, in gorgeous Technicolor, and filled with pretty people.

Come September is a film that tends to be overshadowed in the career of Rock Hudson, especially when held up against his storied work with Doris Day. While I’m all about Pillow Talk as much as the next girl, Come September is not only a visually stunning depiction of Italy in the 1960s, it is an interesting film that is starting to draw some inferences about sex and relationships when societal norms were just starting to change.