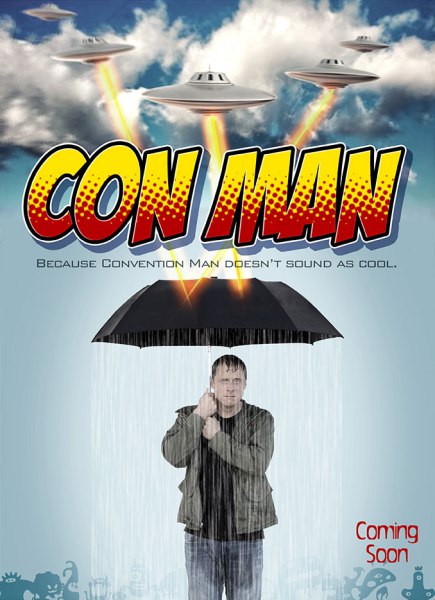 I have been disgustingly behind the 8 ball on Con Man. I’ve been aware of the plans since the little web series was first proposed by actors Alan Tudyk (who wrote and directed the series) and Nathan Fillion on crowd-funding website Indiegogo. However, once it was greenlit by the fans (in record-setting fashion), I lost sight of it.

The good news… thanks to the ever amazing Alan Tudyk’s appearance at Dragon Con, I found it! The comedy webseries has been picked up on the new streaming site, Comic Con HQ (which I can best describe as Netflix for nerdy stuff).

The series follows Wray Neely (Alan Tudyk), an actor stifling under the weight of his starring role in Spectrum a cult-classic, short-lived sci-fi series (sound familiar, all my nerds out there?). The series follows Neely’s life as he tours the comic con circuit, where people worship him for the role of which he feels stifled under the weight. (Watch the season 1 trailer below… Thanks Comic-Con HQ).

The series is a veritable who’s who of the stars of the sci-fi/ fan convention scene.  Fans of the series’ of Joss Whedon (or Whedonites) will particularly enjoy the show, as Tudyk has involved other cast members from Whedon’s one season, cult-classic, sci-fi western Firefly. Nathan Fillion is a regular in Con Man as Jack Moore, Wray’s Spectrum co-star. Sean Maher (who played Simon) has a recurring role as himself. As of episode 6, Gina Torres (Zoe), Summer Glau (River) and the ever-so-awesome Joss Whedon have all appeared in the show.

The Firefly references only take in one fandom. Con Man is incredibly faithful (and representative) to the convention scene as a whole. Sean Astin (Lord of the Rings series, The Goonies) appears in a recurring role as himself. Amy Acker (Dollhouse), Felicia Day (founder of Geek and Sundry, The Guild), Will Wheaton (Star Trek: The Next Generation) and Tricia Helfer (Battlestar Gallactica) all also appear throughout the series.

The 12-15 minute mini-episodes fly by, and they are solidly show and writted by Tudyk in his first writting and directorial efforts. Tudyk’s voice and humor permeates throughout, with dozens of little easter eggs thrown in for fans of Firefly. A particular favorite is when Wray confuses Serenity and Firefly because he has never seen them, and Sean Maher has to correct him (for non Firefly fans… funny because Tudyk also starred in the series).

I reccomend the series whole heartedly if you are anyway apart of a fandom (as most of my readers likely are) or if you are in anyway an Alan Tudyk fangirl as I am (and I know there are a few of us out there). It’s a fun, self-aware show that will speak to anyone who is in anyway a part of this community.

Check out the recently debuted trailer for the upcoming second season of Con Man. (Thank you to Comic-Con HQ for posting).

Pssst… and download the game while you’re at it.