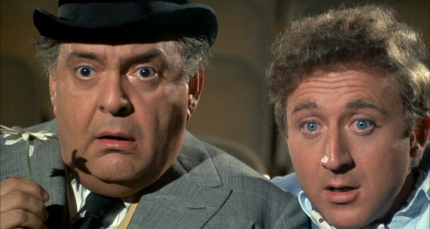 Just a small (and informal) blog post today. As most undoutably know, comedy icon Gene Wilder’s passing was announced yesterday. From Willy Wonka and the Chocolate Factory to Young Frankenstein, and Blazing Saddles, everyone has their own memories of Wilder’s over fifty year career.

The Producers has long been one of my all-time favorite movies, and it definitely belongs in that, “If You Haven’t Seen It, Why Haven’t You?” category. The 1967 film combines a slightly more subdued performance from Wilder as Leo Bloom (the character later portrayed by Matthew Broderick on stage), with the over-the-top comedy of Zero Mostel as Max Bialystock, as two producers trying to create worst show in Broadway history. “A sure fire flop.”

The film is credited as the feature film, directorial debut of Mel Brooks (who had up until that point, been a television comedy writer, honing his craft under the likes of Sid Caesar). While a smaller film then some of his later work, you can definitely see Brook’s trademark style beginning to show through from “Springtime for Hitler” to the early performance of Kenneth Mars as Franz Liebkind, who became a Brooks staple.

The Producers seems to have been a bit overshadowed in recent years, perhaps due to the less than stellar box-office performance of the Lane/Broderick feature film version of musical. Don’t let this deter you. If you haven’t seen this film, and are in any way a fan of Gene Wilder or Mel Brooks, check out The Producers.

Here’s to you, Gene.