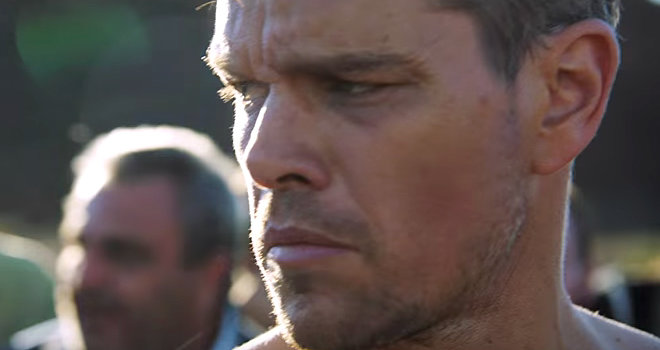 It has been 14 years and 4 (5 depending on how you count) films since The Bourne Identity first graced a movie marquee in 2001. And after being a bit let down after the franchise’s last onscreen venture, I wasn’t sure what to expect this time out. I walked out of the theater pleasantly surprised. Even with its 45 year old star, the Bourne franchise seems reinvigorated, and ready to leap (shaky cam and all) into a new era.

Jason Bourne follows the adventures the original Bourne (Matt Damon, not the ever-so-brief adventures of Jeremy Renner in the last film). He is dragged back into they eyes of the CIA thanks to a hack pulled off by Nicky Parsons (my girl Julia Stiles), still trying to shed light on the shadowy covert dealings of Treadstone and the numerous other shady operations detailed throughout the earlier films. Nicky’s hack, as well as the resulting investigation ran by up and coming super agent Heather Lee (Alicia Vikander), propels Bourne into a rabbit’s hole of old CIA files shedding light on the continuing question of Bourne’s past, his father’s untimely death and the overarching plot of a the shadowy villainy of the CIA.

The downside to the film is a nitpicky point at best. In the interest of full disclosure, I have never been a fan of Paul “please buy a steady cam” Greengrass. I knew this going into this film, and was completely expecting the director’s trademark stylistic flair. We all know that Greengrass likes to shoot tight, and cut quick. It is my feeling that this style can hurt this film’s meticulously crafted action sequences. If you’ve spent months blocking and staging a particular fight scene, why are you cutting too quickly for the audience to actually see what is going on? However, personal griping aside, this didn’t hurt the film, and I actually felt like I enjoyed it more than I was expecting too.

Three cheers to Alicia Vikander for continuing to be all-around awesome, and shine in each and every role she takes on. The development of Heather Lee as a fascinating (and multi-faceted) character was almost enough to make me forgive the film for crimes committed against Nicky, who has essentially turned into a plot device (no spoilers!)  since The Bourne Ultimatum. While Lee was barely a blip in the trailer, as the narrative progresses, we see her acting with full agency. She admits at one point in the film that while she and Bourne have different reasons, they both want to achieve the same end (again, no spoilers!). Her motivations are dubious at best, as the character isn’t afraid to say what is necessary to anyone for her to fulfil her goals. She’s smart, savvy and empowered. And at this point, it’s difficult to say if she’s a villain, or the female lead. I’m just very excited to see how the role will evolve in hinted at up-coming films.

In the past, I’ve found the previous Bourne films overly dense, weighed down with needless emphasis on the deep, inner workings of the various CIA black-ops operations. This film seems to have found a good mix. While there is a secondary plot line involving a tech start-up Deep Dream, helmed by Aaron Kalloor (Riz Ahmed), the plot-line takes a back seat to Bourne’s straight forward, charachter driven, revenge plot. This was a much appreciated change from the earlier films.

As per Bourne franchise standard, the car chase sequence is stunning. This time, the action takes place in Las Vegas, which takes the level for excitement and carnage to a level the other films haven’t been able to achieve. The sequence is well-crafted and awesome in its’ execution. If you see it for no other reason, the car chase is one of the best.

I will freely admit to not being the biggest fan of the Bourne franchise. I’ve found the earlier films to sometimes be overly complex and weighed down by the shooting style of their director; however, this one was different. It’s an enjoyable popcorn film, and is well worth your money on one of the strongest movie weekends of the summer.

One thought on “Jason Bourne: A Review”